Joint event by the TENTacle Fehmarnbelt Pilot Case and STRING organization: On the 19 February 2019, Port of Hamburg Marketing (HHM) as a partner in the EU Interreg Baltic Sea Region Programme project invited relevant stakeholders from the Fehmarnbelt catchment for a final discussion on how to prepare now for the future fixed link. The event was co-hosted by the cross-border organization STRING, who sees the tunnel as a key element in establishing one Mega Region spanning from Hamburg to Oslo.

As the TENTacle project is going to be finalized this April, representatives from the Fehmarnbelt Pilot Case presented their results before passing the torch to members of the STRING organization and the EU Interreg Project “Greater Copenhagen”, who are going to continue the work on cross-border cooperation and connection the region to European infrastructure projects.

Sönke Maatsch, Economist and Project Manager at the Institute of Shipping Economics and Logistics (ISL) Bremen, confronted the audience with cargo traffic simulations conducted as part of a study to help understanding the structural impact of the Fehmarnbelt Fixed Link on transport flows across Europe. The impact is not limited to the coastal areas, since ferry lines and already existing fixed links in the region are part of trans-European supply chains spanning across large parts of central and Central-Eastern Europe as well as Scandinavia. Frede Danborg, Project Manager at Guldborgsund Municipality, showed the audience how their involvement in the Fehmarnbelt Pilot Case revealed development opportunities arriving from the municipality’s proximity to the future Fehmarnbelt tunnel and two European transport corridors. Guldborgsund’s traffic analyses show a significant increase in truck and train cargo. Using workshops, dialogues and in-depth interviews with key stakeholders and investors within the transport and logistics industry, the optimal location of Business Park Falster was confirmed. It will serve traffic coming via two current ferry connections from Germany and the future tunnel. The chosen business model targets the immediate demand for safe storage and rest time for truck drivers. 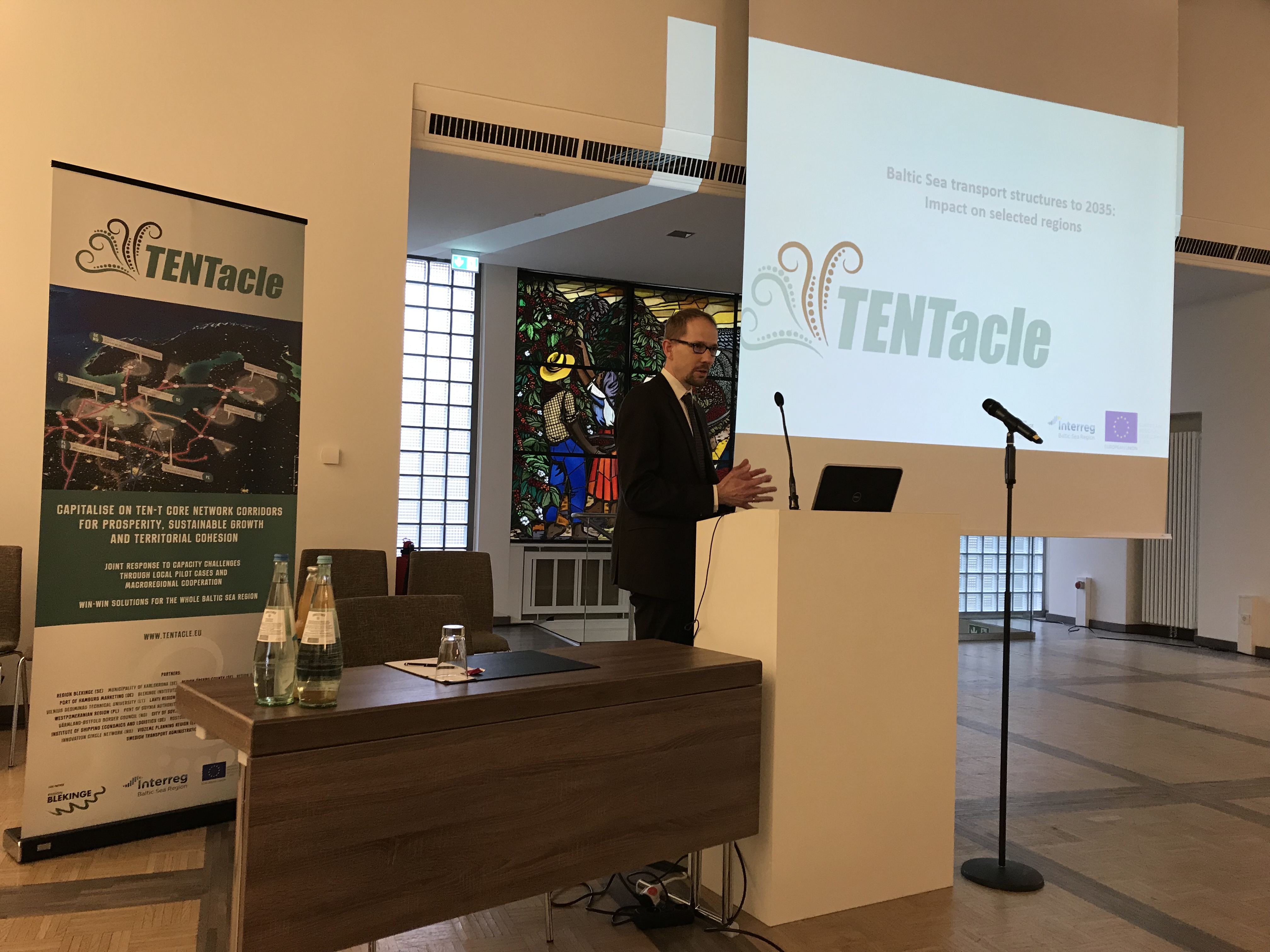 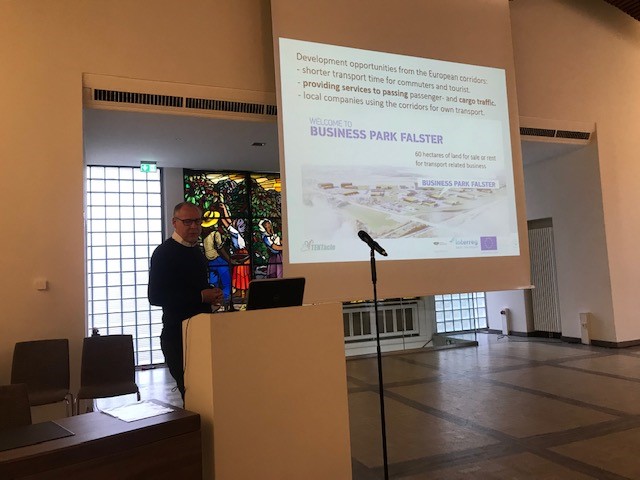 Afterwards, Thomas Becker, Managing Director of String, explained their vision for regional cooperation from Hamburg to Oslo fuelled by the construction of the Fehmarnbelt tunnel. To him the future fixed link is one important tool to achieving this vision, which is bigger than just this one infrastructure project. The STRING ambition is to create a green hub, which will lead to investments, sustainable growth and job creation. One of the most important ways to achieve this is goal is building the right infrastructure – which needs to be coherent in the entire corridor. 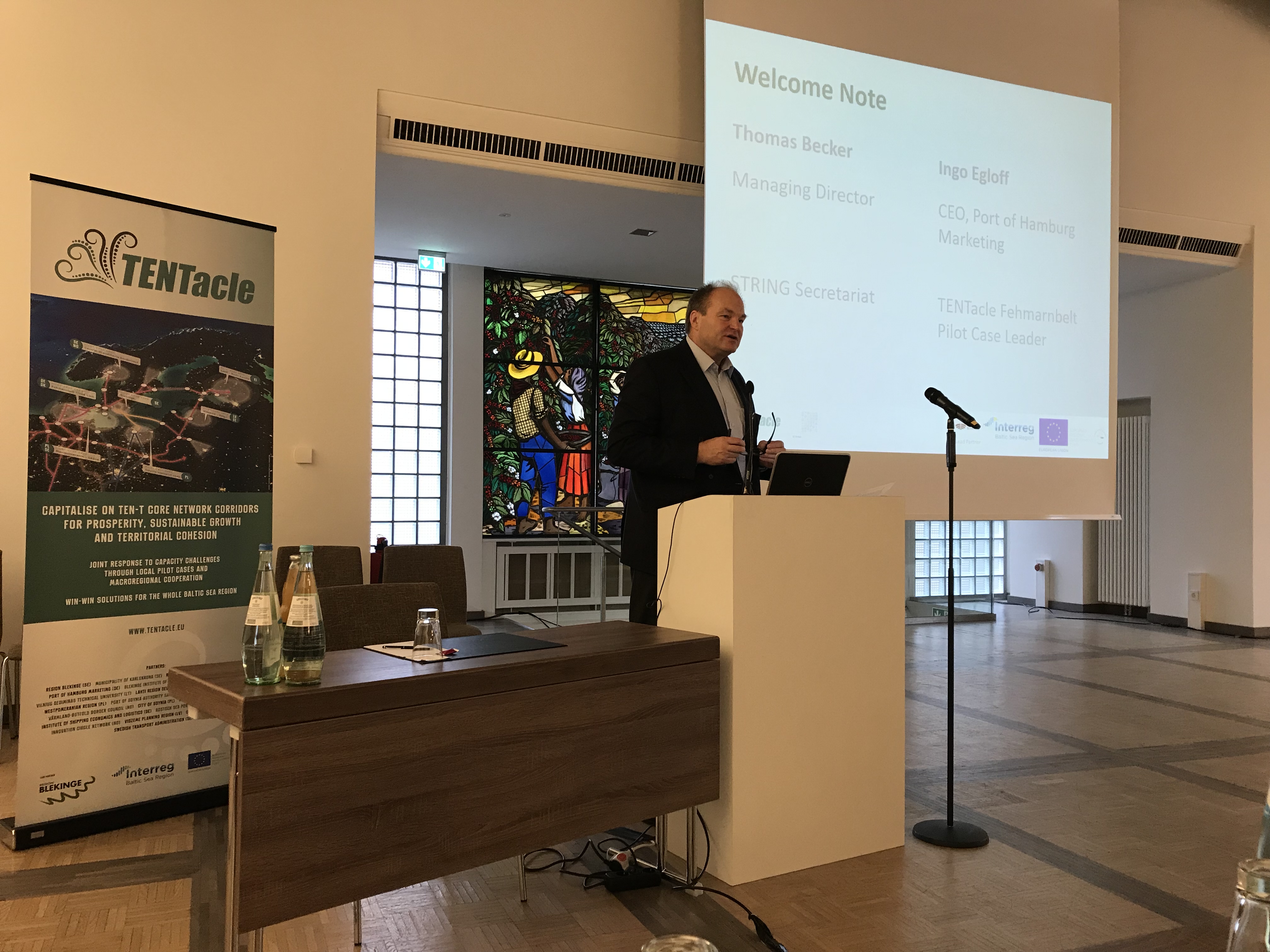 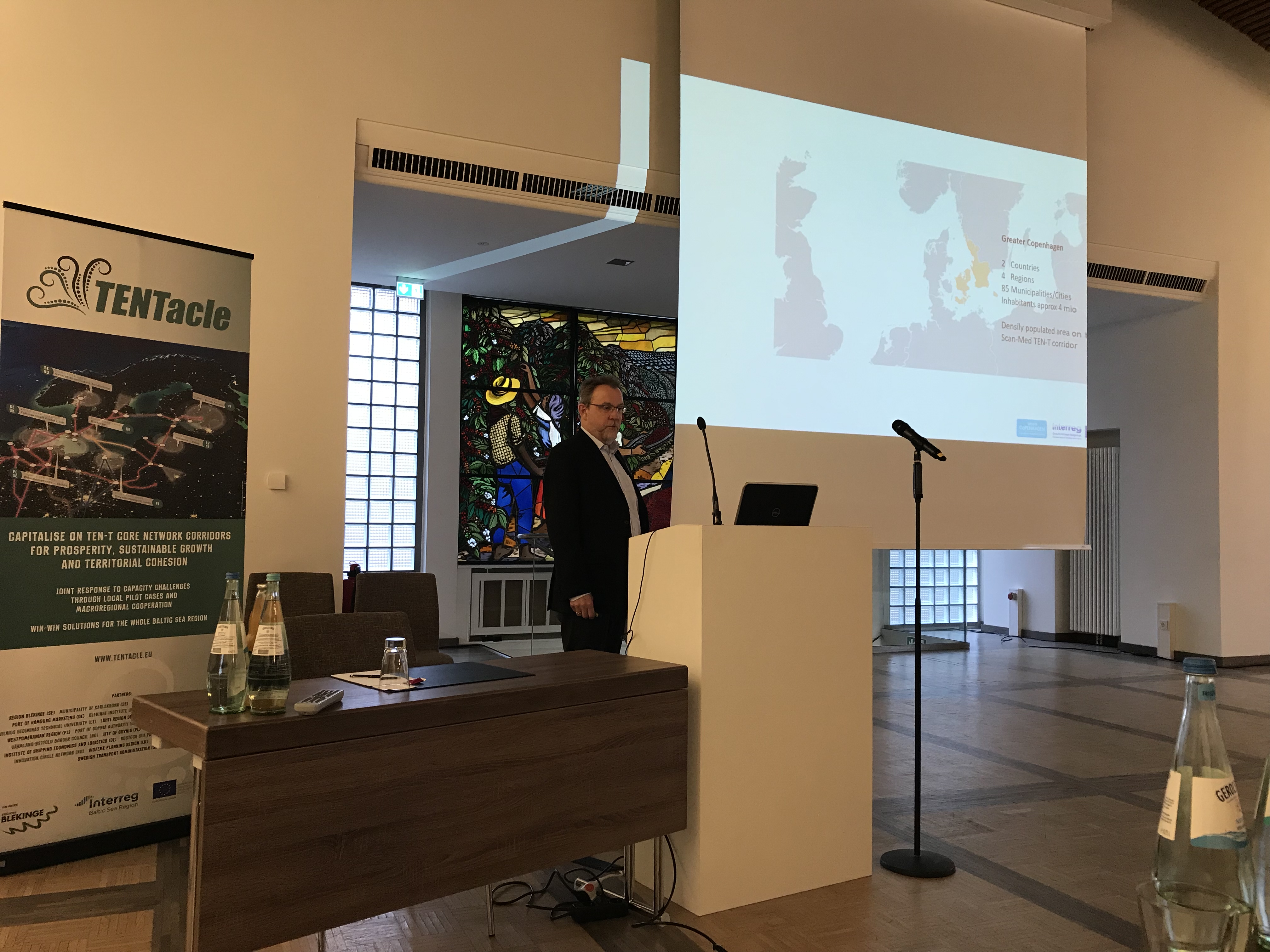 A similar vision – although on a smaller scale – is shared by the Interreg project “A coherent transport system for Greater Copenhagen”, which was introduced by Sten Hansen, Project Leader for Strategic scenarios for railway services within this cross-border transport project. Greater Copenhagen (or Öresundsregionen) is a political co-operation between Denmark and Sweden. The expected outcomes include a joint Swedish-Danish plan for rail-services and common infrastructure, including new fixed links across the Öresund and preparing the region for the future Fehmarnbelt tunnel.

Following the presentations, Sönke Maatsch and Thomas Becker were joint on stage by Prof. Dr. Sebastian Jürgens, Managing Director of Lübecker Hafen-Gesellschaft (Port of Lübeck), Marko Möller, Manager for Special Projects at Scandlines and Per Thye Rasmussen, Senior Consultant Regional Development at the Danish Chamber of Commerce. Together they actively discussed current and future trends in the Fehmarnbelt region. 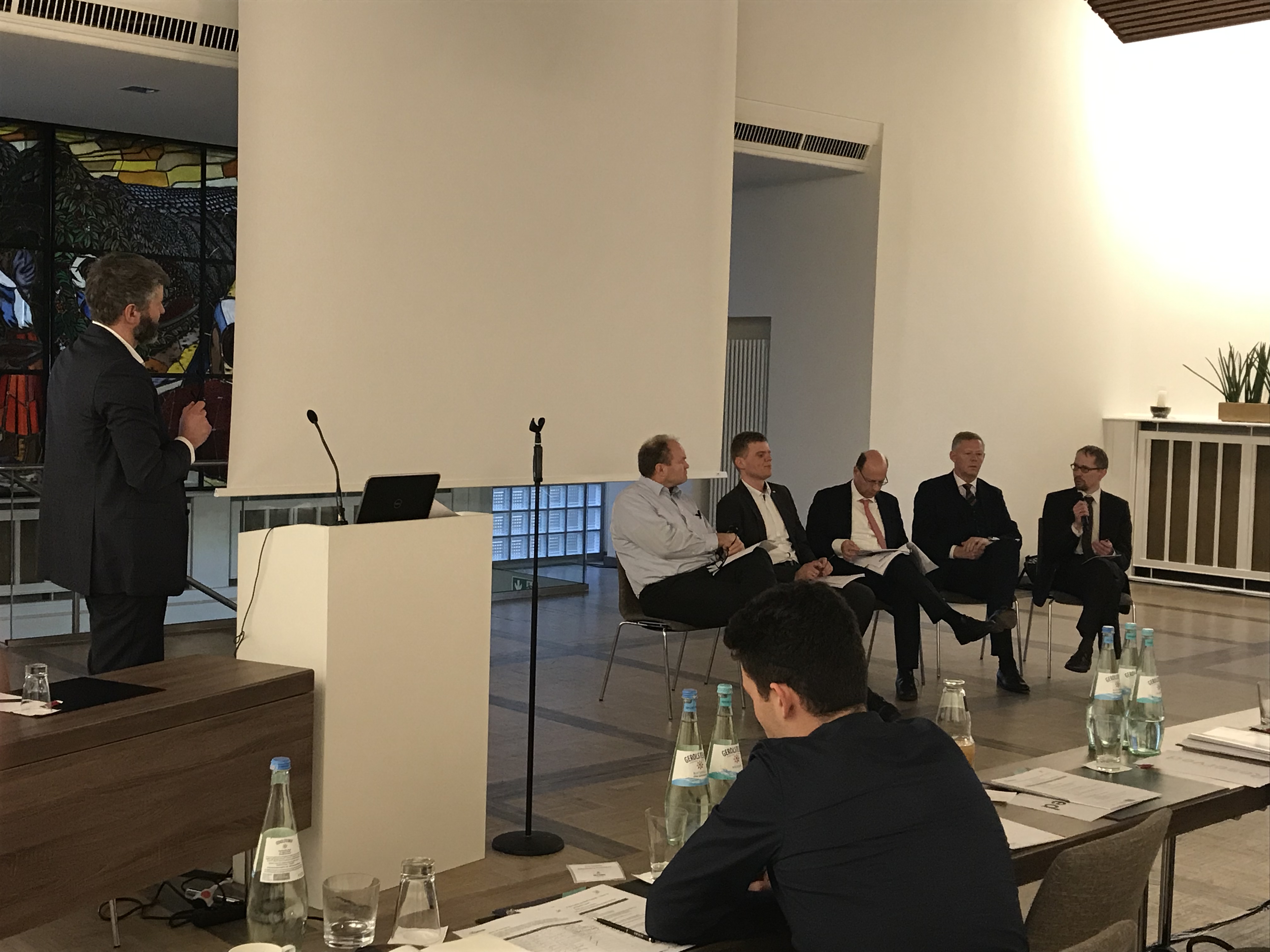 Per Thy Rasmussen reminded the audience that regional integration does not come by itself, which he further illustrated using the example of the Öresund bridge. Thomas Becker stressed the symbolic value of the future tunnel, connecting the regions and overcoming regional differences. Their cross-border ambitions were answered more critically by Sebastian Jürgens and Marko Möller. They both represent private transport businesses, which are going to face serious alteration of the conditions under which they do business once the tunnel is fully operational. According to Sönke Maatsch, their study shows that both companies are going to have to face a loss in traffic due to the fixed link. Jürgens and Möller did not question the reality or necessity of the tunnel, but nevertheless renewed their demand for a level playing field and fair and equal competition conditions. Despite the construction of a tunnel, infrastructure linking the ports and intermodal services should not be neglected and reliable data on the future prize of the tunnel is needed. Consumers should be left with more than one choice for crossing the Fehmarnbelt, rather than only the tunnel. Both companies are already preparing their businesses for possible future impacts. Scandlines aims to diversify their business with new ferry routes and will also deploy additional environment-friendly hybrid ferries to maintain its services on the Puttgarden – Rødby route. The Port of Lübeck is already one of the biggest employers in the region and is looking for new partners to establish a major logistics hub in northern Germany.

Per Thye Rasmussen concluded by emphasizing once again that not only the cargo transport industry, but also the labour market is going to change drastically due to the faster connection between Germany and Denmark. Border obstacles will have to be removed and the regions will have to work together on making the transition as seamless as possible.

The presented TENTacle reports and results of the project’s stakeholder interaction process on anticipating impacts of the future Fehmarnbelt tunnel can be found in the download section of the TENTacle website. The most important findings are summarized in the final guidance paper “How to use the Fehmarnbelt Fixed Link as impulse for regional growth”.

Seeing the Fehmarnbelt Fixed Link in a broader perspective – from Hamburg to Oslo
Thomas Becker, STRING